May 5, 2003 – Ridgecrest, CA – Brant Whiting answered President Bush’s call to service for America’s youth. The extraordinary lad recently gathered a group of his friends and formed The Bow Brigade. Brigade members began tying yellow bows around one mile of trees in downtown Fullerton in support of the troops engaged in Operation Enduring Freedom.

Brant wanted to do more.

Earlier in the Operation Enduring and Iraqi Freedom campaign, Whiting came up with a plan he dubbed “15 Pennies for our Troops”. The idea called for people everywhere to collect 15 pennies, the amount of POW’s and MIA’s at that time, for 22 days, the number of days the POW’s were held captive. The campaign not only was supported by his peers and adults, but the Anaheim Angels will host a 15 pennies drive at both of their Memorial Day games.

Whiting contacted Cash which will result in the young man being the first to donate to Operation Family Fund.

Tuesday, May 6 at 11:00AM, Brant Whiting will present Cash with the fund’s first donation. The event will take place at the park in front of the Oceanside Pier.

Operation Family Fund is a private, non-profit, volunteer, public benefit corporation. The corporation is committed to ensure that all available resources are used to assist eligible members and immediate families of members of Military and Civilian personnel who have died or who have been permanently injured as a part of Operation Enduring and Iraqi Freedom both domestically and abroad to achieve financial self-sufficiency and find solutions to short term and long term needs.

Brant Whiting is best known for his literacy project, “Read All Over” that has gained nationwide support. Truly, a remarkable young man. 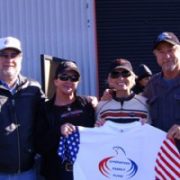 Santa Barbara Couple Donates $5,000 to Operation Family Fund in Support of Our Troops